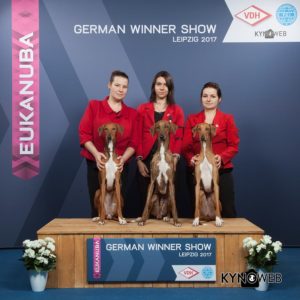 Be with our news!

BRIEF HISTORICAL SUMMARY : Salukis vary in type and the variation is desired and typical for the breed. The reason for the variation is the special place held by the Saluki in the Arab tradition and the immense size of the Middle East area where the Saluki has been used as a hound of the chase for thousands of years. Originally each tribe had Salukis best suited for hunting the particular game in its own area, but by Middle East tradition, Salukis are not bought or sold but presented as marks of honour. It follows that those presented as such to Europeans and brought to Europe came from a wide variation of terrain and climate and vary accordingly. The British 1923 standard was the first official European breed standard for the Saluki and was drawn up to cover all these original types of Saluki.

GENERAL APPEARANCE : The whole appearance of this breed should give an impression of grace and symmetry and of great speed and endurance coupled with strength and activity. Smooth variety : the points should be the same with the exception of the coat which has no feathering. FCI-St. N° 269 /

IMPORTANT PROPORTIONS : • The length of the body (from point of shoulder to point of buttock) is approximately equal to the height at the withers, although the dog often gives the impression of being longer than he really is.

BEHAVIOUR TEMPERAMENT : Reserved with strangers, but not nervous or aggressive. Dignified, intelligent and independent.

Jaws/Teeth : Teeth and jaws are strong with a perfect, regular and complete scissor bite.

Eyes : Dark to hazel and bright, large and oval, but not prominent. The expression should be dignified and gentle with faithful and farseeing eyes.

TAIL : Long, set on low and carried naturally in a curve, well feathered on the underside with long silky hair, not bushy.  In adults not carried above the topline except in play. Tip reaching at least to the point of hock.

Shoulders : Well laid back, well muscled without being coarse.

Upper arm : Approximately equal in length to the shoulder blade and forming a good angle with it. Forearm : Long and straight from elbow to wrist.

Front feet : Feet of moderate length, toes long and well arched, not splayed, but at the same time not cat-footed; the whole being strong and supple; feathered between the toes.

GAIT / MOVEMENT : smooth, flowing and effortless at trot. Light and lifting showing both reach and drive without hackney action or pounding.

HAIR : Smooth and of a soft, silky texture, feathering on the legs and at the back of thighs, feathering may be present on the throat in adults, puppies may have slight woolly feather on thighs and shoulders. The smooth variety has no feathering.

COLOUR : Any colour or combination of colours is permissible. Brindles are undesirable.

FAULTS : Any departure from the foregoing points should be considered a fault and the seriousness with which the fault should be regarded should be in exact proportion to its degree and its effect upon the health and welfare of the dog.

• Any dog clearly showing physical of behavioural abnormalities shall be disqualified. N.B.:

• Male animals should have two apparently normal testicles fully descended into the scrotum.

• Only functionally and clinically healthy dogs, with breed typical conformation should be us